Iraqi Communist Party :The People Want a National Government that Responds to Their Will 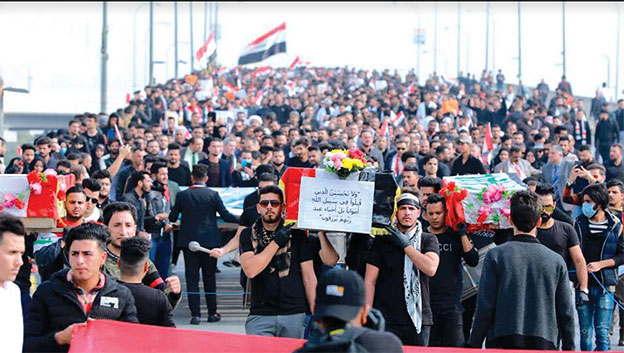 The Central Committee of the Iraqi Communist Party issued the following statement on 3 February 2020:

Last Saturday, 1 February 2020, Mr. Muhammad Tawfiq Allawi was nominated, as a compromise candidate, to form the transitional government. In this regard, and in connection with the evolving developments and events, we state our position as follows:

First: The nomination was done in the same way, and not significantly different from that by which Mr. Adel Abdel-Mahdi and the previous governments came and was rejected by the masses of our people in the courageous October Uprising.

Second: It seems clear that this nomination came about with the blessing of the main ruling groups that are represented in the Parliament. It reflected the internal political balance and external influences, regionally and internationally, and intentionally omitted the large and most important actor in the current political situation, i.e. the protest squares and the masses of participants in the Uprising and their demands. This was soon reflected in the widespread rejection of the nomination, in protest squares and sit-ins.

Third: It is not surprising that the nomination has faced this rejection. It does not meet many of the criteria set by the popular masses of the Uprising, as well as those called for in the speeches of the Marjaiya. Foremost of these criteria is the independence of the candidate from the ruling political system: that he/she must not have been tried before, and also "not controversial". Mr. Allawi may not be controversial in the eyes of the ruling groups, but he is controversial in the eyes of the Uprising’s participants.

Fourth: The main criterion that determines the stance towards any candidate for the post of prime minister at present is the extent of his/her merit and ability to accomplish the tasks assigned to the transitional government. The most important of these tasks is preparing for early free and fair elections at the earliest time, in addition to revealing the identity of those responsible for killing and suppressing the demonstrators and bringing them to justice, and acting on the biggest corruption files and sending the corrupt to court. Undertaking such tasks can only be done by a government that is formed away from the sectarian power-sharing quota system and the tutelage of the ruling blocs, that has the courage and ability to take decisions independently and in accordance with the supreme national interest, and enjoys the confidence and support of the masses of the Uprising.

Fifth: The ruling political blocs did not hide their concern about the Uprising and its legitimate demands that call for changing the failed political system holding the reins of power. They are fearful of the continued momentum of the Uprising, defying death and all forms of oppression imposed on it. Therefore, how can these political blocs support a prime minister who makes pledges to accomplish tasks that threaten their influence and spoils and subjects them to judicial accountability?

Sixth: The nomination of Mr. Allawi was not endorsed by any of the major ruling blocs. Rather, they were content to announce their approval or not to oppose him, while most of the Uprising’s participants rejected him. So, where will Mr. Allawi find the means and powers that enable him to implement the pledges contained in his speech of accepting the assignment?

Seventh: The country is going through a suffocating crisis for which the forces holding power bear the main responsibility. It is perpetuated by the devastating effects of their quota power-sharing policy, the brutal suppression of the Uprising, and the procrastination in implementing the legitimate demands of peaceful protesters. There is no real way out of this crisis other than comprehensive change and reform in the ruling system and the rulers through early elections, and other than adopting another approach to governance and administration based on the principles of citizenship, true democracy and social justice.

Eighth: One of the criteria for testing any new government is its stance towards constitutionally guaranteed freedoms and respect for human rights and protecting them from violations.

Ninth: We declare that we will deal with any new government in accordance with the aforementioned criteria and principles, and that our judgment of it will be based on its actions, not on its words and promises. We recall how many promises were lavished by previous PMs while the situation continued to deteriorate and the crises worsened.

Tenth: All the forces that have participated and contributed to the Uprising, and that have an interest in comprehensive change, are called upon today more than ever before to coordinate, unite, avoid taking decisions unilaterally and ensure the success of the Uprising and achieving its full objectives.

Eleven: The courageous Uprising and its glorious martyrs have turned a new page in the history of our country and raised hope once again in the possibility of change and in building a promising future for our people and all their constituents. We will, therefore, remain on the side of the Uprising and the legitimate issues and demands of our people. We will continue to support peaceful protests in all its forms, denouncing the repressive practices and attacks against them, regardless of their source and whoever is responsible for them.

Twelve: We must point out that violent practices and actions here and there by some of the elements connected to the Uprising do not serve it and harm its peaceful image and character.

Finally, the continuous momentum of the peaceful demonstrations and protests, expanding their ranks and consolidating them, is a condition that guarantees the implementation of the road map leading to the organisation of early, free and fair elections, which would correct the relationship between the people and the state's legislative and executive institutions, and restoring confidence in them.

We look forward, along with all our people, to providing security and stability throughout the country, and the return of normalcy to citizens. However, this will not be achieved by suppressing peaceful protests and circumventing the legitimate demands of the Uprising, but rather by speeding up their implementation to restore the citizens’ confidence in their homeland after being alienated from it due to the corrupt and those implementing unpatriotic agendas. Those who pin hopes on the glow of the glorious Uprising fading, or on aborting it, will be making a mistake.