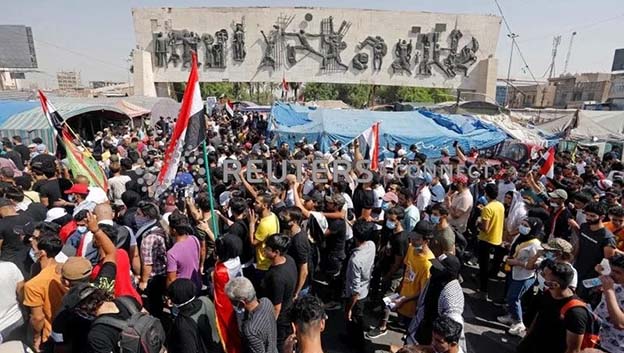 Tens of thousands of Iraqis took to the streets in Baghdad and several other provinces on 1st October 2020 to mark the first anniversary of the Popular Uprising that shook the foundations of the corrupt political system. Despite succeeding in overthrowing the government and forcing the ruling groups to succumb to the demand for early elections, other demands for radical reform and change remain unfulfilled. Key among the demands is investigating the killing of more than 700 young protesters and bringing the criminals to justice.

The all-encompassing structural crisis gripping Iraq, on political, economic and social levels, that led to the eruption of the Uprising on 1st October 2019, continues. It has been further aggravated in recent months by the coronavirus pandemic and the financial crisis caused by the fall in world oil prices. The country relies heavily on oil revenues which make up more than 90 percent of its budget.

The essence of the deepening crisis lies in the policies pursued by the ruling political blocs that continue to perpetuate the sectarian-ethnic quota system (‘Muhasasa’) that was installed after the US invasion and occupation of Iraq in 2003.

Rampant corruption and plundering public money have been endemic features of this political system.

Among other grave challenges is the growing role of militia-type armed formations and organized crime, undermining the state’s sovereignty and its ability to assert the rule of law. The relationship between the federal government and the Kurdistan regional government also continue to be fraught with tension. The terrorist ISIS, that had suffered a big military defeat three years ago, has been rearing its ugly head again in some areas.

Many political forces continue to rely on external support, opening the door to regional and international interference in Iraq’s in internal affairs, serving foreign agendas and interests. This situation threatens to turn Iraq into a battlefield to settle scores at the expense of its own independence, national sovereignty and people’s interests.

All these factors have contributed to deepening the political deadlock and social tensions and polarization. The gap between extreme affluence and abject poverty has deepened, with high unemployment especially among the youth who have lost faith in the ability of the ruling blocs to offer solutions to the chronic problems and crises bedevilling the society.

Popular anger exploded in a heroic Uprising on 1st October 2019, on a scale unprecedented for many decades in the country’s modern history. Mass demonstrations and sit-ins were met with bloody repression, resulting in more than 700 protesters killed and thousands injured. It demonstrated the burning desire of the people, especially the youth, for change and getting rid of the existing corrupt and sectarian political system, to build a better life and achieve a secure and prosperous future.

The previous Prime Minister Adel Abdul-Mehdi was forced to resign in late November 2019 after refusing to respond to the demands of the peaceful protesters, resorting instead to brutal repression and giving militias a free hand to kill, kidnap and torture young protesters and civil activists. After 6 months of deadlock, fierce disagreements and infighting and among the ruling political blocs, an interim government headed by a new Prime Minister, Mustafa al-Kadhimi, was approved by the parliament in June 2020.

The new government’s programme included a number of these tasks: Investigating the killings of protesters and bringing the criminal to justice, early elections, investigating corruption cases, tackling the coronavirus pandemic, and tackling urgent economic and social issues to alleviate the suffering of the people.

However, the approval of Kadhimi’s nomination was a result of an America-Iranian consensus and came as a compromise among the dominant ruling blocs.

This precarious equation, with all parties concerned, whether internal or external, exerting pressure to ensure that Kadhemi’s government serves their agendas or prevent it from threatening their interests, has led to vacillation in its measures.

During recent weeks, protests have escalated on various issues, including demonstrations by hundreds of unemployed graduates and engineers in Baghdad.

One other main cause of mounting popular anger is the deterioration of health services and the deep concern that hospitals are losing control as coronavirus cases surge. According to latest official figures, the total number of deaths is 10,254 and there are 427,000 confirmed cases.

The Prime Minister Kadhimi declared that early elections will take place on 6 June 2021. Early elections, that are fair and credible, was a principal demand of the October Uprising and the protesters. It is seen as a principal constitutional means for peaceful democratic change. However, this requires reforming the whole electoral system. The early election is therefore another arena of fierce political struggle.

The factors that triggered the Uprising on 1st October 2019 continue to exist. There is, therefore, a very real possibility of the renewal of protests. A peaceful mass protest movement is essential to achieve the just demands of the Uprising, defeat the sectarian quota power-sharing system and corruption, and bring about radical change by asserting the will of the people and move towards a democratic civil state, based on citizenship and social justice.