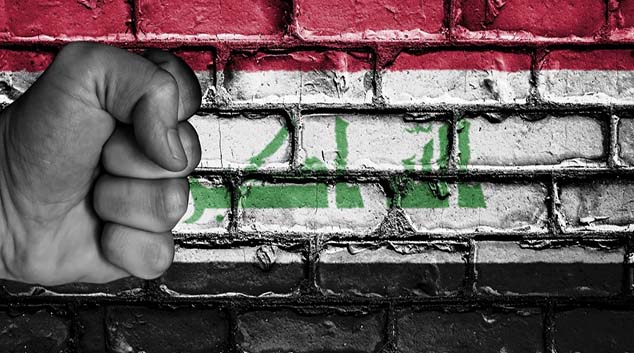 However despite the oppression, there is hope in the October uprising, which is being harnessed to fight for change, says the IRAQI WOMEN’S LEAGUE-UK

TODAY the world will mark the International Day for the Elimination of Violence against Women.

In Iraq, the day will undoubtedly be dutifully marked by the government, but the sad reality is that domestic violence has become entrenched as a banal and routine part of daily life in Iraq.

However, there is an opportunity to change this; last month the people of Iraq marked the first anniversary of the October uprising which saw men and women alike take to the streets to demand their basic rights and basic amenities.

We witnessed the awakening of a new generation of political consciousness which if seized upon could drive real change in the country.

Of course, we must be under no illusion about how difficult any progress towards the elimination of violence against women will be.

For decades now Iraqi women have been subjected to violence and oppression whether at the hands of the state or their families.

It was women who bore the brunt of sanctions under the dictatorship — fighting to keep their families fed.

Similarly, it has been women who have suffered most from the sectarian violence and carving up of country and community since the invasion.

Hard-won rights and cultural progress made since the 1950s have slammed into reverse with the rise of Isis and other violent ideologues who dress up their ambitions for control and power in the cloak of religious zeal, often penalising women first and furthest.

All of this has happened under the backdrop of a weak and fractured government which has handed back power to militia and tribes — meaning that although the Iraqi constitution provides for equal rights for all citizens regardless of gender, the almost non-existent infrastructure to enforce this right renders the constitution unworthy of the paper it is written on.

This has skewed the very perception of violence. In Iraq today there is a decline in women’s awareness of the concept of domestic violence, with over half of Iraqis considering it the right of a man — even his duty — to “discipline” his wife and daughters.

This unforgiving cultural environment means that there is huge underreporting of domestic violence which is increasingly seen as part and parcel of daily life.

The situation is bleak, and coronavirus has only served to make it worse. Even with clear underreporting, the Islamic Information Centre has seen the number of reports of domestic violence increase by 44 per cent during Covid-19.

Domestic violence has been linked to over 100 cases of suicide or attempted suicide. And too often, even when women have been brave enough to report the domestic violence to the police they were forced to stay at home with their abusers.

During Covid-19 and lockdown we have seen a huge increase of technology-related violence and abuse against women and they have been unable to find justice in a culture that blames the victim.

But there is hope. There are organisations working for a feminist future in Iraq — providing support for victims while advocating for long-term change.

Since its establishment in 1952 the Iraqi Women’s League has defended and fought for the interests and rights of Iraqi women.

Today, it is more important than ever. Among other things, the league works to raise awareness of the rights of women and children through campaigning and educational programmes and has been on the front line in the fight against community and family violence.

In the last 10 years the league has worked with other women’s organisations to amplify the voices and work of women in Iraq for their rights.

This has culminated in the establishment of the 1325 Coalition Network, so called after the landmark resolution on women, peace and security adopted by the UN security council in October 2000.

The work of these coalitions and grassroots organisations has continued unabated for decades — through dictatorships and sanctions, invasions and Isis and now a global pandemic.

Now there is an opportunity for real change — not sticking plasters and interventions after the fact.

The October uprising, the long-term impact of which is not yet known, has awakened a new generation who want to create a better future for the homeland away from the dominating corruption and sectarianism.

Just as the activism of the Black Lives Matter movement in the United States was successfully seized on and translated to votes at the ballot box, the awakening of Iraqi youth and women through the October uprising is being harnessed to fight for change.