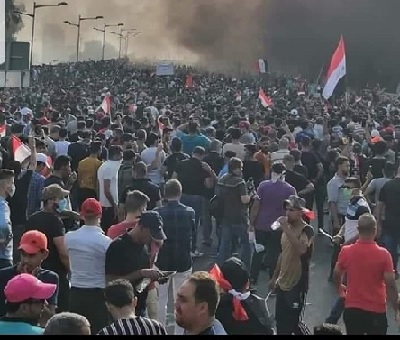 Almost four months have passed since the eruption of the courageous popular October Uprising, and its basic demands remain unfulfilled. Procrastination and playing for time, along with premeditated killing and other repressive practices, is the policy pursued by the forces in power in order to end the broad peaceful popular movement rather than complying with its legitimate demands.

However, the recent developments have demonstrated that these hopes to end the protest movement are doomed to failure. The brave participants of the Uprising are becoming more coherent, determined and bold, despite the increasing numbers of martyrs and victims who fall in the confrontations and as a result of assassinations and direct targeting by the security forces and armed elements that are no longer unidentified!

The ruling forces are persisting with their intransigence, insistence on the same power-sharing quota system that produced the current deep crisis, and unwillingness to respond to popular demands. All this has led to a political impasse which, if it continues, poses grave dangers to the country. The most prominent of these dangers are the high levels of violence, the paralysis of state organs at the central and local levels, the decline of state authority in favor of outside players, as well as mounting human rights violations and breaches of international covenants by the Iraqi government.

This situation has been met with widespread popular rejection, while the voices of condemnation for the suppression of the Uprising have been rising worldwide from international human rights organisations, the United Nations, and finally the position expressed by a recent joint statement from ambassadors in Baghdad from 16 countries.

The continuation of the current crisis impacts negatively on the living conditions of our people, which had already deteriorated, and also deepens the gap between the people and the ruling political system. All of this has led to intensified popular anger which finds its expression in peaceful escalation by protesters in various provinces.

In the face of these dangers facing the country, which must be urgently averted, it is necessary to act as follows:

Here, it must be noted that the nominations for the post of head of the government cannot be accepted while bloody repression of peaceful demonstrators continues, and without concrete measures to prosecute those responsible for attacking the sit-ins and killing protesters. This requires a clear and decisive position on the part of the Presidency.

Glory to the martyrs of the glorious Uprising .. Wishing speedy recovery for the wounded and injured.