Iraqi Communist Party: We Support the Just and Legitimate Demands of the Demonstrators Statement of the Central Committee on 16th July 2018 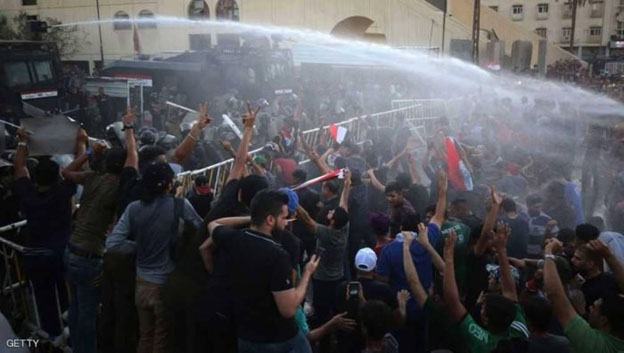 We Support the Just and Legitimate Demands of the Demonstrators

We have repeatedly stressed that the situation in the country does not please anyone, and that there is a great deal of accumulated problems and difficulties that are awaiting solutions that have not been found for 15 years. Some aspects are actually getting worse, especially in public services, the provision of electricity and water, deterioration in the health, education and transport sectors, as well as the increasing rise in poverty and unemployment rates and the lack of employment opportunities in the public and private sectors. Among those seeking jobs without success are qualified people and university graduates in various disciplines.

In the face of this calamitous and tragic situation, social tension is rising and the level of discontent and resentment is growing. The mistrust between citizens, on the one hand, and the ruling groups, decision-makers and those who control the affairs of the country have been deepening since the change in April 2003 to the present day.

The people have suffered enormously, made huge sacrifices and dealt patiently with countless mistakes and practices which they endured every day and felt their terrible consequences, especially during the periods of confronting terrorist Daesh. But the rulers have persisted with their polices, plundering public money, reneging on their lavish promises and deepening the gap between the poor and the rich. They insist on pursuing the same failed policies, holding on to the sectarian-ethnic quota power-sharing system, to perpetuate their hegemony, domination, influence and wealth. All this and other factors have raised the level of popular anger and resentment.

In the face of these dire conditions, citizens from different sectors and strata have been forced to take to the streets demanding their rights that some of which have already relinquished by the state. They have demanded the provision of services, combating corruption and offering job opportunities. The masses resorted to demonstrations and holding rallies, and seeking through various legal and peaceful forms to publicize their demands. But their demands were ignored, and some hoped that they would be forgotten with the passage of time, while popular anger is gradually turning into a volcano of discontent and resentment.

The demonstrations and protests that we are witnessing today are an inevitable outcome of the country's comprehensive crisis and its root cause; the sectarian-ethnic quota power-sharing system, and the state of impasse which the country is facing in various aspects. The wave of demonstrations, in their new version, characterized by the broad participation and involvement of large sectors, have sent a strong message rejecting the failed policies and warning that insisting on them only means repeated failure.

These demonstrations are in line with the spirit of the Constitution and the citizen's right to express his opinion and demands, which must be cherished by the state, federal government and local governments, safeguarding the lives of the demonstrators and ensuring their safety. It is, therefore, totally unacceptable to resort to firing live ammunition and excessive use of force, compiling detention lists that include well-known civil activists, and other methods that are unacceptable in a constitutional country that wants to consolidate democratic life.

Of course, in large demonstrations and protests of the kind we are witnessing today, we can find those who seek to influence their course in a certain direction. But this does not in any way affect their general character and their demands which are supported by an overwhelming majority of our people, especially the deprived and the toilers.

While rejecting and condemning the use of violence against the protesting citizens, condemning any attack on public and private institutions, the headquarters of parties and houses of residence, emphasizing respect for the members of the armed forces, and stressing that the strength of the demonstrations lies in their peacefulness and just demands, we reiterate that these demands, both immediate and long-term, cannot be met on the basis of de facto logic and the use of security means and in an excessive manner. We are sure that this will exacerbate the problem and make it more intractable, and will open the door to those who harbour ill intentions towards our country and try to interfere in what is going on, both internally and externally.

Our experience confirms once again the need to establish a government of competent people, untainted by sectarian-ethnic power-sharing and corruption. Such a government must be committed to a reform program, timelines for implementation and putting the right person in the right place, so as to give clear and concrete signals to the existence of a true will to pursue the path of change and real reform, combat corruption firmly, meet the immediate needs of people, address the accumulated problems and unresolved issues, and secure a free, dignified and safe life for the people.

The conditions of the country cannot be tackled by piecemeal measures and giving hollow promises. What is happening today can happen again if its objective causes continue, and the root cause of this is the suffering of the people which is worsening day by day and requires urgent concrete solutions.