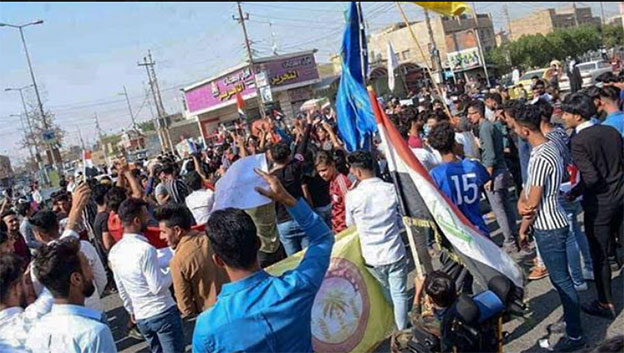 Statement of the Iraqi CP’s Central Committee (on 15th November 2019):

Victory to the People’s Uprising

The uprising of our people did not start last month and made enormous sacrifices in pursuit of partial solutions or cosmetic reforms, but directly raised the goal of salvation from the existing system of governance, the power-sharing quota policy in all its forms and the rampant corruption. It has clearly declared that the time for comprehensive change has come, and that it is necessary to launch a new phase in the country's march and open up the way for the establishment of a state based on citizenship, true democracy and social justice.

After all the deliberate killings and the bloodshed in an unprecedented brutal and horrific manner, with hundreds of peaceful protesters and security forces injured, and campaigns of detention, kidnapping and forced ‘disappearance’, and after the support for the valiant people's uprising from various popular and social sections, as well as professional, trade union and religious organisations .. After all this, the peaceful protesters are adamant that there will be no return to what had existed prior to 1st October 2019.

We stress that any procrastination or delay by the Government, the Parliament and dominant ruling forces in complying with the demand for real change, will only inflict harm on our people and our country.

While noting that the Uprising, which is effectively an unparalleled popular referendum, has entered its 45th day with great momentum and vigour, and with great determination to achieve its objectives, we reiterate support for it by all peaceful means, and reaffirm the demands we already made:

A- To accomplish the immediate and urgent steps to secure the people's livelihood and satisfy their urgent needs, and implement the economic and social demands of the participants in the Uprising.

B- To bring just retribution to those who committed the crimes of killing the demonstrators and those who issued orders to them. To release all the ‘disappeared’, the detainees and the kidnapped, and to stop the campaigns of pusuing and harassing other participants in the Uprising.

C- To act on the cases of corruption, starting with the worst cases, to bring the corrupt to justice and recover the looted money.

D- To prepare for early elections provided that it is preceded by:

Upon completion of the above tasks and legislations, the Parliament must dissolve itself. The Government would then be a caretaker government. The constitutional amendments that need to be made will then be one of the first tasks of the new elected Parliament.

E- To restrict the possession of weapons by the State.

F- To preserve the sovereignty of the Iraqi state, ensure the independence of national decision-making and prevent external interference in its affairs.

Let us work diligently to sustain the momentum of the peaceful Uprising until its objectives, the goals of the people, have been fully realized.