Iraqi Communist Party Statement on the Crime of Targeting the Hea...

Statement on the recent Parliamentary Elections in Iraq :Iraqi Co...

Iraqi Communist Party: No to War .. Yes to Peaceful Solutions and...

Interview on Recent Developments and Electoral Alliances in Iraq.... 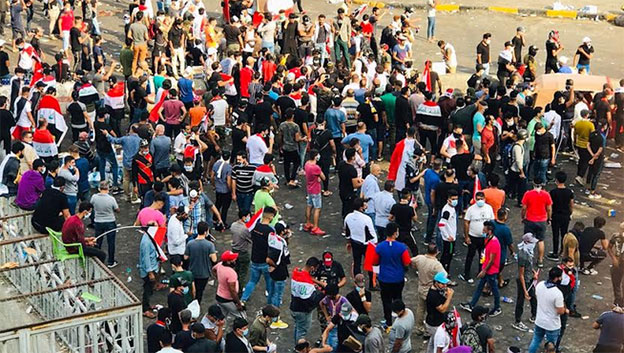 The following is the Editorial of “Tareeq Al-Shaab” (People’s Path), the daily newspaper of the Iraqi Communist Party, published on 5 November 2019.

The government issued a new statement on Sunday night (3 November 2019), delivered by the Prime Minister, that provoked the feelings of the masses participating in the Uprising. It reflected a misreading of the reality of the broad popular protest movement, its comprehensive demands and its consequences.

A quick reading of the statement shows that it was very provocative to the participants in the Uprising and the majority of the people. This is evident when he speaks of the decreasing numbers of martyrs, as if this is an accomplishment that has preserved the precious blood, while blood continues to haemorrhage. Or when he clearly holds the demonstrators responsible for the violence, the use of excessive force used and deliberate killing.

It is also strange that the situation is presented as if the participants in the Uprising were in a school trip and the time has come for them to go back home to rest!

But the strangest thing is not to read the message of the protesters well, despite the clarity of its content. We shall repeat here this message with the hope that it will be remembered for the last time. What is required now is the resignation of the government and its departure, as it is responsible for the shedding of the blood of more than 260 citizens and more than 12,000 injured! This must be the starting point for a comprehensive change affecting all levels, in the forefront of which is the political system, with regard to policies, performance and personalities, and early parliamentary elections.

It is also important to note the contradiction between the government statement that speaks of banning the use of live bullets, and what happened less than 24 hours later, on Monday, when the massacre at Al-Ahrar Bridge in Baghdad took place, thus exposing the reality of this stance and the falsehood of what was announced and broadcast.

The responsibility for what is happening lies with the accumulated policies and insistence on them. The government's stubborn attitude is pushing things to a dangerous brink. It must therefore immediately stop playing with fire. In order not to reduce everything to ashes due to misreading the situation, selfish and narrow interests and external agenda, it must take the initiative to take political responsibility for what has happened and submit its resignation, to open the way to the formation of a new government. The latter should be formed away from allegiances and pressures of political blocs and away from the power-sharing quota system. It must be based essentially on the interests of our people. This government should be composed of competent national figures that have integrity, and it should implement a road map that will take our country to the shores of security and stability, launch it on the path of reconstruction and establish a state of based on citizenship, law, true democracy and social justice.

This is the path of stopping the bloodshed and responding fully and unequivocally to the will of the people.