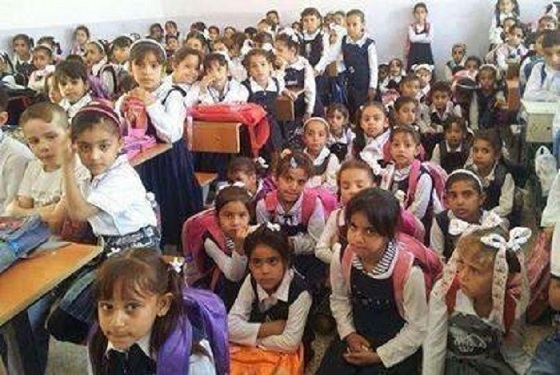 With the start of the new school year and opening its doors to millions of students and learners, the problem of overcrowding and filling school buildings with two or three, or even four schools in some cases, this harsh reality is going to be the biggest challenge facing the Iraqi Ministry of Education.

After going through years of decline, including throughout the last fourteen years, the education system has not managed to keep pace with global developments. If we went back to 1991, and even earlier, and browsed the reports of UNESCO, we would find that it had declared Iraq a country that used to own an educational system unparalleled in the region where the percentage of primary school enrolment was 100 per cent.

However, if we compare this with post-2003 period, we will find that the percentage of those who can read and write in Iraq is shocking 55 per cent in males and 23 per cent in females. In addition, the total number of Iraqi schools is around 15,500, of which the increase in primary schools constitute around 30 per cent.

As far as the realities of education and learning in the province of Basra is concerned, standards have deteriorated in an unprecedented manner to the extent that Basra has not enjoyed the construction of one single school since 2014.

Statistics indicate that, prior to 2014, the province has witnessed the beginning of building 48 new schools, but this process has never been completed until now. Thus, existing schools started to witness the ballooning of student numbers to the extent that some of them, and in some districts, are turning into a-daily-four-or-five-tier attendance structure.

It is worth noting that most of the areas surrounding, and being part of Basra, are in dire need of establishing new schools in order to save the deteriorating educational status quo.

The irony is how a province that exports such a large number of barrels of oil every day can provide such a dismal level of education to its learners. (Basra exports more than 3 million barrels per day).

The phenomenon of two or three tier schooling system is widespread in Basra, and figures show that the city needs around 600 new buildings in order to overcome the existing structure, that is despite having more than 1700 primary, intermediate and secondary schools in operation. The familiar reason cited for not building new schools is a shortage of funds at the ministry level first, and at Basra governorate level second.

In an interview with the newspaper “Tareeq Al-Shaab”, a student, Hussein Haidar, said: ‘Most of the timetables of the intermediate and secondary schools are dual-time, while primary studies may reach up to four’.

Another interviewee (a teacher) said: “Basra schools suffer from a shortage in the teaching staff. In some cases, we have to employ teachers who are not qualified in their scientific specialities. Sometimes we may close entire classes or schools due to a lack of teaching staff’.

According to one parent named Abu Ali, the deterioration of the living standards, suffered by Basrawis, is one important factor in abandoning education. Many Basrawi families rely on their children to work after school, while finding it hard to supply those children with stationery supplies that the state itself does not provide.

And with regards to the private sector, which spread ubiquitously after 2003, it is noticeable that some private educational institutions are not licensed, and others do not follow the required conditions. Moreover, government control or supervision is not at the required level which has led to a significant increase in those institutions.

Finally, according to statistics issued by the authorities in Basra, out of 800,000 local students, about 20 percent only are registered in private schools, as the majority of families are unable to pay private education fees.